Shiny sinks and other things

Why is it that having a shiny sink can make me feel so incredibly happy, and housewifely, productive and in control. Frankly it's a great pick-me-up to have at the beginning of a day. It reminds me of a conversation I was having with my mum a few months ago; we were discussing how to achieve a shiny sink. I remember saying 'Why had I never discovered Viakal before?' when my 14 year old daughter walked in from school. I remarked to her that at some point in the future she would be having a conversation about the relative merits of having a shiny sink and how happy it would make her. She did not believe me!

Anyway, I thought I would try and blog the way through my day today and see what happens. It's not quite a typical day in my household, it's the weekend my older 2 children stay at their Dad's, and my beloved husband is away on a camping trip with his mates, so it's just me and Digger, which when I think of it, is quite a typical day!

The day has started well for me, because I actually got a whole nights sleep. This happens to be a fairly rare occurence, since sleep is not Digger's strong point. He went down to sleep between 7:00 and 7:30pm and hadn't had a nap in the day, and woke up at 6:30am, praise the Lord! I can count the number of times that has happened, since he was born, on the fingers of one hand.

Before we came downstairs, I put some worship music on in my daughter's room, while she's not there, and then put some on in the living room downstairs to fill the house with praise and worship. Then while Digger was pottering about with his toys, I made the momentous decision to shine my sink, refer to above! As I cleaned, I prayed and declared it as worship to the Lord and that I would do all things as unto the Lord in this day. Then I made bread, well looked through my breadmaker recipe book, put all the ingredients into the breadmaker and selected a program, does that count?!

Then Digger and I had breakfast and had our devotion time. We've been reading a few prayers aloud from his children's prayer book that Great Nanna gave him for his dedication, and a page from his book 'Blessings Everyday'. Then we started Book 2 of 'Beginning with God', which goes hand in hand with the 'Beginner's Bible'. Added to this I've been praying the 'Caleb Prayer' each day. This stems from having read ' The Grace Outpouring: Blessing Others Through Prayer ' by Roy Godwin and Dave Roberts, which I encourage you to read if you want to be encouraged and challenged about what the Lord is doing in these days. 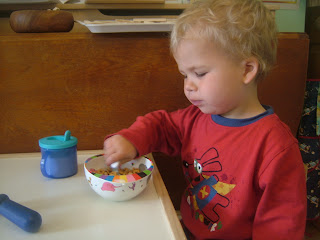 ﻿Goodness, this blogging malarkey certainly eats into your day! It's a steep learning curve for me, so please bear with me, some of you out there in blog land make it look so easy! Digger has just come in from the garden where he's been playing in the sandpit, asking for something to eat, apparently it's bread he wants, I think he can smell it cooking. Imagine wonderful bread baking smells wafting around the house! Well it won't be ready for another 20 minutes so he'll have to make do with a cracker.
While I've been writing, the very nice post lady has turned up with my new purchase, a book, of course, 'Nourishing Traditions', by Sally Fallon with Mary Enig. I've been spending the last couple of weeks immersed in blog land, following some very interesting and wise women who are way ahead of me in their journeys through some of the issues at the heart of being a homemaker, woman, mother etc. and this book has come up in various ways, and I felt compelled to purchase and peruse it thoroughly in order to weigh up some food issues. I'll let you know how I get on with it. Oh those blogs I've been following are:
http://www.kitchenstewardship.com/  'All that is good' over at http://trintje.blogspot.com/
Well the bread is finished, smells wonderful, doesn't look pretty, but feels nice and light. While it is cooling, I'm just going to put on a load of washing and then take Digger out for a turn on the bike, he's been itching to get out all morning. I'll get back to you later on today, all being well.
Posted by Jo Mitchell No comments:

String painting and other things

I'm currently sitting in my conservatory looking out at ominous dark clouds drifting overhead, trying to decide whether I need to water my garden or whether it's going to rain. I can hear my husband's voice drifting down the stairs as he reads our small son, 'Digger', a bedtime story. I can't hear what he's saying exactly, but I can hear the rise and fall of his voice as he reads so expressively - I'm guessing it's a Fireman Sam book.
Today has been a good day and it's not even over yet. I've felt productive, which is something that always seems to make me feel better about myself. My little 'Mate' arrived at about 8:25 this morning while we were still brushing our teeth. While Digger and Mate were playing, I gathered together the items needed for our painting activity. After donning their aprons, the boys each chose their piece of coloured paper. I showed them how to dip pieces of string into the paint and wiggle it across the paper and they both had a go. Along the way they both decided to get really stuck in to the paint with their hands and I realised that the long-sleeved aprons would have been a better choice!
﻿﻿ ﻿﻿ 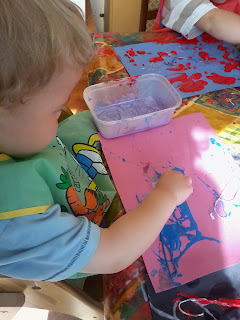 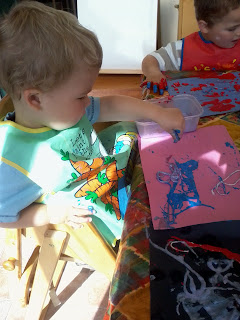 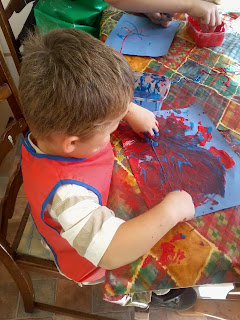 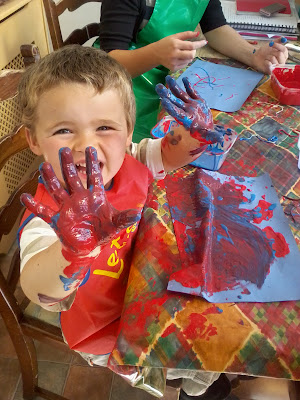 ﻿It took me a good 45 minutes to clear up all the paint from tables, chairs, small people, sink, floor and pots. It was worth it!
After our snack, the boys helped me hang out the washing, deeply fascinated by the pegs.
Then I decided it would be a great idea to do some baking for lunch. I decided to go for Annabel Karmel's 'Coconut Kisses'. Great theory, but in practice was lacking a vital ingredient: desicated coconut. Ok, so we made something, not sure what to call them, replaced the coconut with flaked almonds and replaced chocolate chips with raisins. So they are now renamed Jo's 'Fruity, Nutty, Nibbles'. Anyway, there's only two left, they went down a storm. Even my husband ate two, and he hates raisins in cookies. 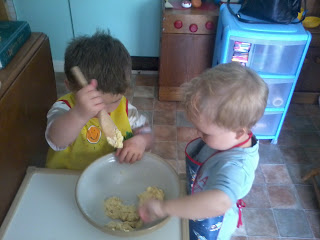 ﻿
After lunch, we went to the park. The boys had a great time letting off some steam, running backwards and forwards to different items of play equipment.
A great and busy day was had by all. Digger was yawning during teatime, and staring off into the distance, very subdued. Hopefull he'll sleep well tonight.
Well, the dark clouds seemed to have moved on, which means I will have to get on with the watering I think.
Posted by Jo Mitchell 1 comment:

Well, I hardly know where to start! I am beginning this blog with various things in mind and expect that it will evolve as I go along. I would like to create a record of the journey I'm on as wife, mother, home maker, educator, creative person and lover of the Lord. I'd like to have something to look back at, and a way of collating all my thoughts and memories. I look forward to making friends along the way, and look forward to your helpful comments!

So I've just taken this picture of my littlest blessing to show you. He's sitting next to me eating some grapes and apple and wondering what I'm up to on the computer again. 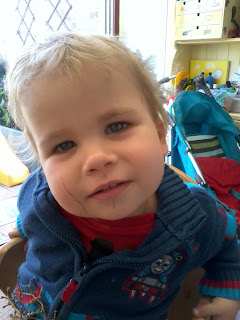 ﻿Well, I'm not going to go mad on my first post! The oldest two will be home from school any minute, I need to think about dinner and to tidy up a bit. So I'll say goodbye for now.
Posted by Jo Mitchell 1 comment:

Jo Mitchell
I'm a mum to four lovely children and wife to my wonderful, hardworking and beloved husband. We live in the South West of England.